PSE&G announced today in celebration of Earth Day that it purchased a state-of-the-art street sweeper to clean the streets of Harrison NJ.

PSE&G is replacing gas piping throughout the Town of Harrison as previously reported.  As part of the process, PSE&G has to cut into the blacktop and dig trenches.  The dirt from the trenches is dumped directly onto the street and then moved to a central location to be picked up and carted away.  The dirt is not placed back into the trench because new dirt and a stone base are placed into the trench and then covered with temporary blacktop.  The blacktop and new dirt are also dumped in the street temporarily. According to PSE&G, it is impossible to take the soil from the trench and place it into a dumpster directly.  So it is necessary to dump the soil onto the street and move it around to pick it up later.  The dirt is light brown and does give Harrison a rustic southwest desert look by coloring the blacktop. 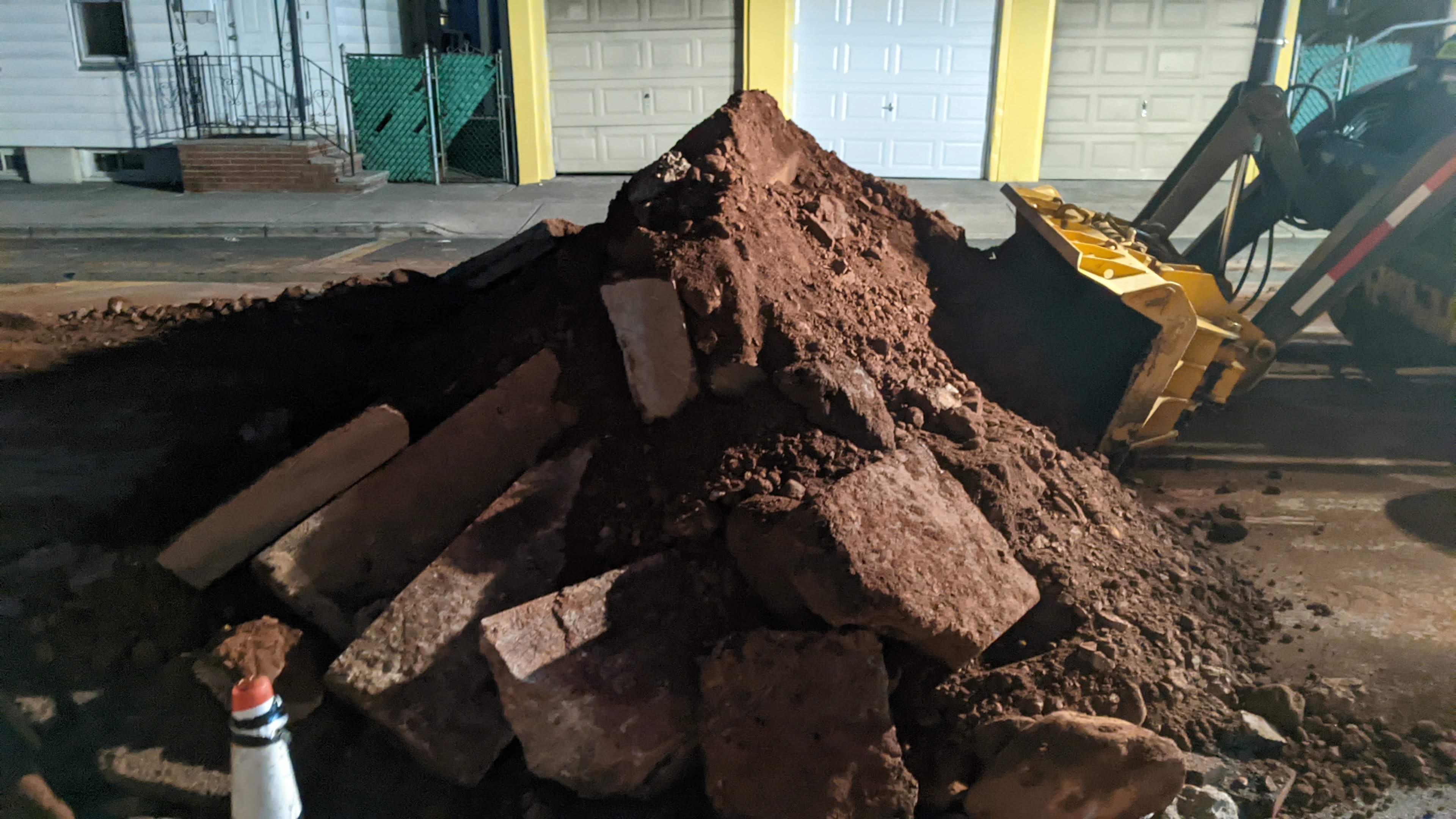 Brown Soil, Blacktop & Concrete from Trench Piled Up by PSE&G on William St. in Harrison NJ

PSE&G is currently using brooms to sweep up the dirt that remains on the street.  The brooming causes the dirt to get into the air and blow onto sidewalks.  In addition, the brooming does not get all the soil off the street.  This causes the dirt after it rains to go into the street sewers in the community.  It also goes into the area adjacent to the curb.  PSE&G announced that it was going to purchase a state-of-the-art Street Sweeper, a Ravo 5 i-Series, to take the soil off the street so it does not go into the sewer system or remain on the street and get onto residents' shoes.  At times, there is enough dirt on the street that if it rains, it turns into mud. Not great for those new sneakers or dress shoes.

According to the manufacturers of the RAVO 5 iSeries, the RAVO 5 iSeries is the absolute best compact mid-size street sweeping machine in the world. Its robust and recognizable appearance has been a common sight in cities all around the world for many years. Every detail of the 5 iSeries was developed with one thing in mind: a clean street in one pass, no matter the season or conditions, urban or rural, sand or leaves, desert heat or arctic cold, highways or bicycle lanes. We agree.  Play the video above to see it in action.

PSE&G announced that while it waits for its RAVO 5 iSeries street sweeper to arrive from the manufacturer, it is going to rent one from a local dealer and start using it immediately in Harrison.

This is welcome news from PSE&G who has been causing havoc in town as previously noted in blog posts. PSE&G Not Such A Good Neighbor and PSE&G Continues Attack on Residents.

It is also good news for the Environment.  The New Jersey Department of Environmental Protection (NJDEP) requires towns to conduct street sweeping operations as part of the Sewer permitting process.  The Town of Harrison submits a yearly report of its street sweeping operations.  PSE&G is also subject to NJDEP regulations and the street sweeper will assist it in meeting its obligations under its street opening permit issued by the Town’s Construction Department.

In addition, PSE&G announced that it will complete all non-emergency work by 10 p.m at the latest but it plans to stop work by 7 p.m. each day to allow residents to park on the street after work and not disturb residents' sleep.  This is also great news from PSE&G because there is a lack of parking in Harrison and residents need to sleep well at night to go refreshed to work the following day.

Let us know what you think about the PSE&G announcement on this Earth Day.  Join our Discussion Board for free and let us know.