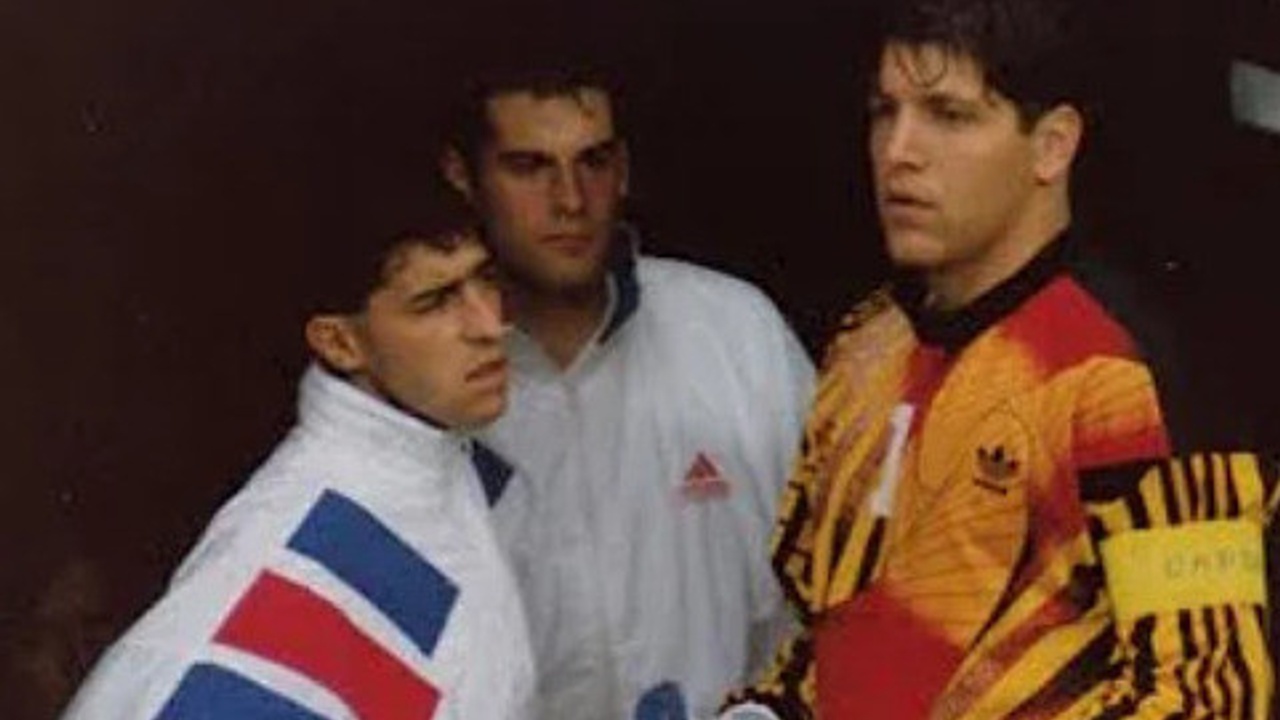 On Saturday, October 8, 2022, there may be a reunion larger than a sold-out game at the Red Bulls Arena.  The venue will be the area surrounding The Courts in Harrison NJ.

The Courts gets its name from the fact that before it was a miniature soccer field it was a Tennis court that local kids used to kick around a soccer ball .  The location in the center of the Town of Harrison was a convenient meeting place.  Kicking the soccer ball into the Tennis net imagining that it was a soccer net eventually caused the net to tear.  The Harrison Town Engineer ,Joseph Cundari, decided that his favorite sport Tennis was not winning out over Soccer and he designed a miniature soccer field in honor of the children who did not take to tennis as he had as a teenager.

For most of its life, The Courts was an asphalt court not and much to brag about.  In the beginning, there were no extra tall fences enclosing The Courts.  Soccer balls would go into the adjacent Veterans Memorial Park and what was then South 4th Street now South Frank E. Rodgers Blvd.  Part of the soccer training was dodging cars to retrieve the soccer ball.

According to Michael Dolaghan the President of Friend of Harrison Soccer, who commissioned the monument several special guests have been invited to an unveiling of the Harrison Soccer Sculpture Monument at Harrison Library Park on Saturday, October 8, 2022, at 11 a.m.  The monument is going to be placed adjacent to The Courts.  Among the guests are Tony Meola, Tab Ramos, and John Harkes who played together in the 1990 World Cup.  Although Meola, Ramos, and Harkes played in The Courts in Harrison and credited it with helping them hone their soccer skills, all three resided in neighboring Kearny. A movie entitled Soccertown USA documents their story and the history of soccer in Kearny NJ but includes footage of The Courts and is referenced as a place where local kids played competitive elimination games and in the process became better soccer players. The limited space as one coach put it "did not allow you to hide".  In other words, you had to contribute to the ball passing and actively participate on the field.

Andre Iwanczyk sculpted the monument which consists of a bronze 9-foot Soccer Player on a base.  The statute is meant to memorialize the contributions of those who played and coached soccer in Harrison.  Of course, because soccer is an international sport, everyone is welcome to consider the Soccer Player as one of their own.  Andre Iwanczyk unfortunately will not be physically present for the unveiling of his sculpture as he passed away earlier in the year.  The monument was made by the Burns Brothers Monuments and the Modern Art Foundry.

The Public is also invited to attend the event.