The following is the front cover of the Harrison Fest 2017 Souvenir Book which had artwork done by Emily Isidoro, a Harrison High School Student who Anselmo Millan encouraged to come up with artwork that would capture the 25 Queens representing different countries under one American flag. 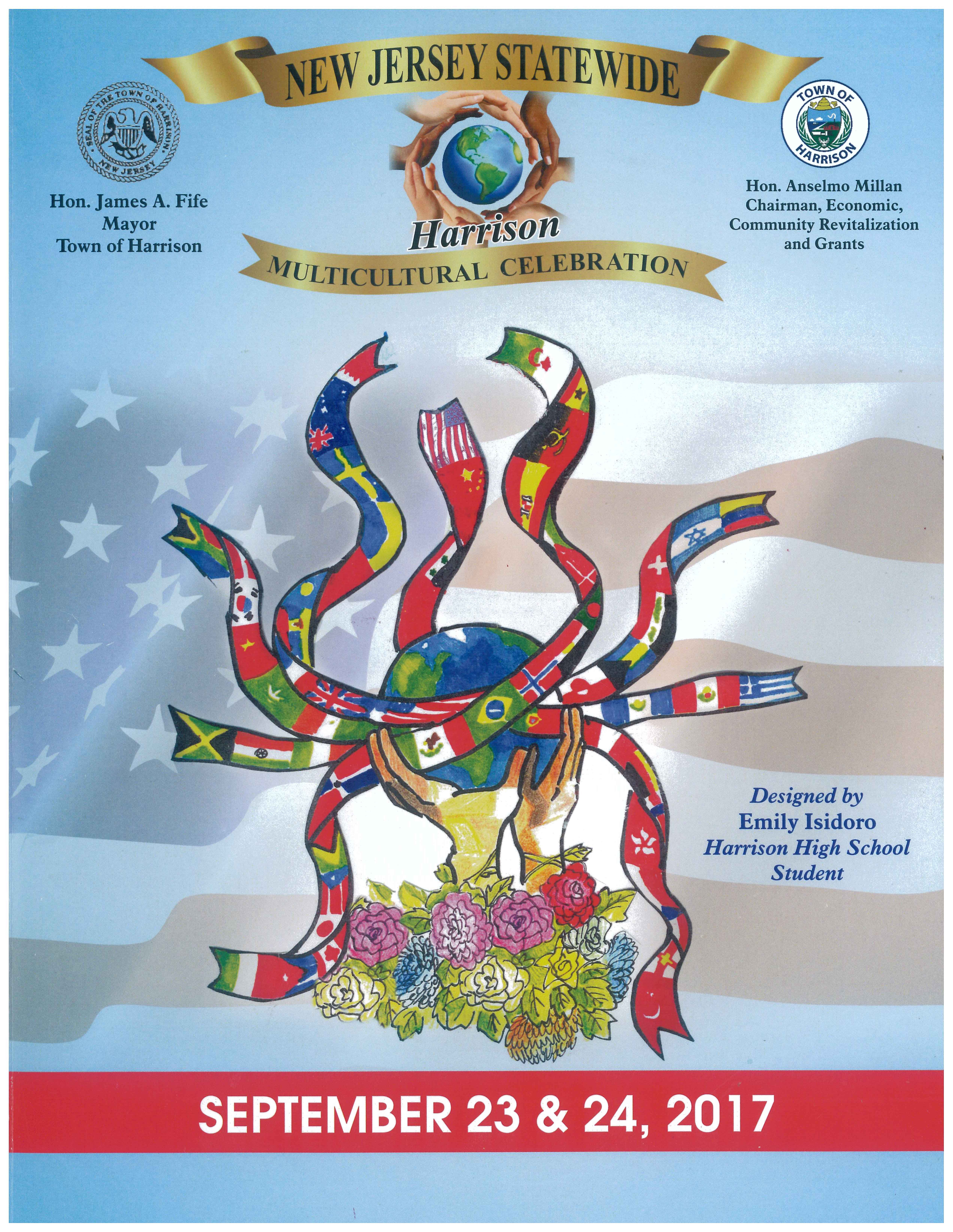 in 2017, Mayor Fife stated regarding Harrision Fest "We had a great couple of weeks.  We had a Queens [Gala] Celebration which was great.  Then we had [Opening Day] Mass, another Gala Celebration, Great Parade, and of course, the weather held out.  It was beautiful days.  Anselmo, I want to Thank You Very Much for everything you did.

You and your committee worked tirelessly to get the job done and it was a great success.  We had a great time and I can speak mostly for a few of us that were there that I saw, we had a wonderful time and we are looking forward to next year [2018]."

To read captions click on CC for Closed Captions on Video. 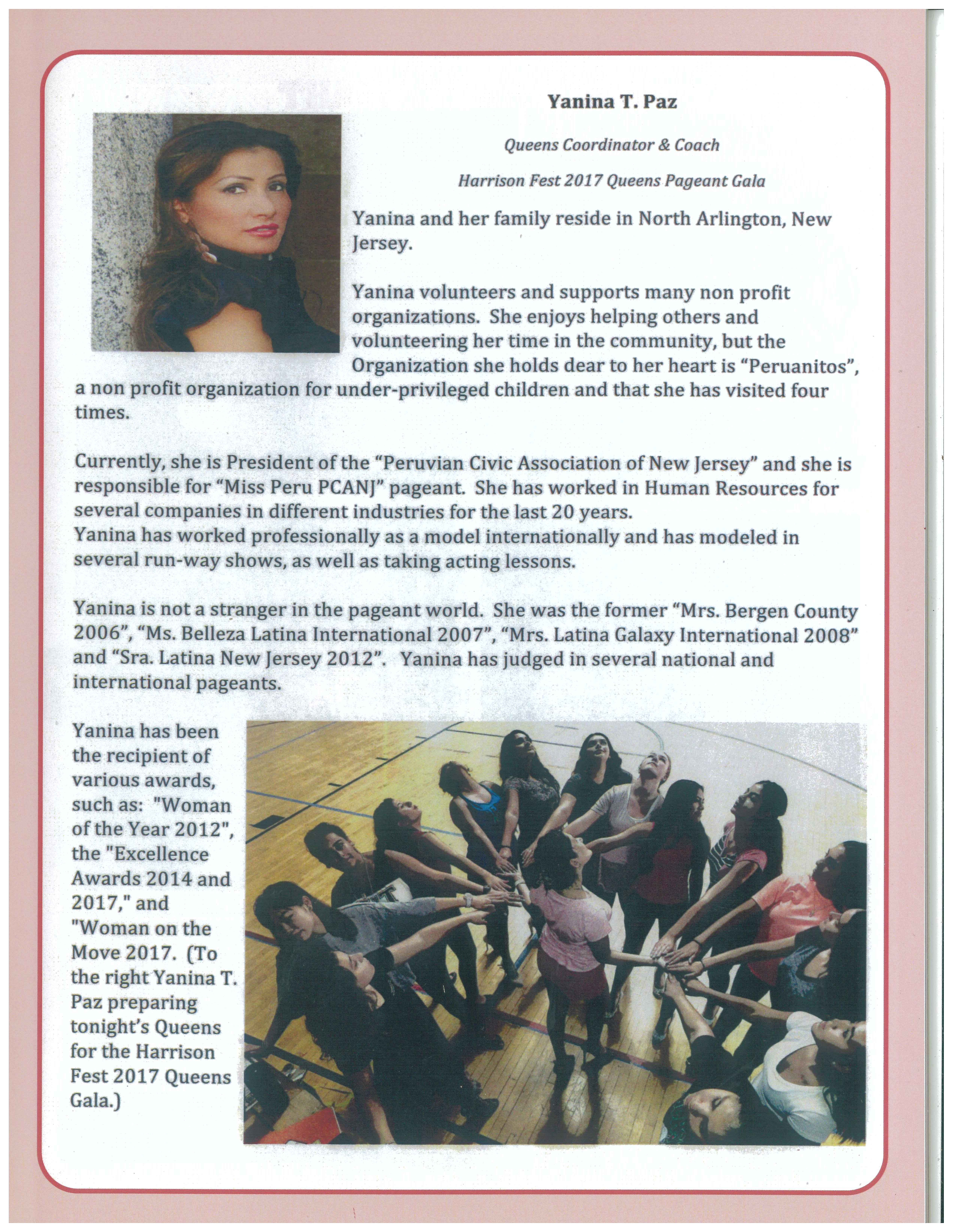 The Queens Gala was envisioned by Anselmo Millan as a way to celebrate the diversity of Harrison residents while at the same time giving thanks for being fortunate to be residents and citizens of the United States of America.  As Anselmo Millan puts it, "It is a celebration of 25 different country's cultures under one big United States of America flag."  The Queens Gala held a week before Harrison Fest weekend for sure sets the tone for the other events of Harrison Fest which include an Opening Day Mass, the Grand Parade, and a 2-day Street Festival with live entertainment, rides, diverse food, and just plain joy of walking back and forth and taking it all in along Harrison Avenue (closed to vehicles and made a Pedestrian Mall).

When Anselmo Millan proposed the closure of Harrison Avenue for a Grand Parade and Street Festival, he got a huge backlash that it was impossible to close Harrison Avenue to vehicular traffic because it was a County Road.  Anselmo put together a traffic plan and went to the County for its approval.  With the approval in hand, he asked for a meeting of all Town Department Heads and a meeting was held in the third-floor chambers just outside the Mayor's office.  The resistance was still present at the beginning of the meeting but after much discussion and argument, the late Mayor Raymond J. McDonough supported then Councilman Anselmo Millan and the department heads then agreed to Anselmo's plan to close the Avenue.  History was made when Harrison Avenue was closed and the Grand Parade and a Street Festival brought residents and their guests to celebrate Harrison's diversity.

Harrison Fest 2018 did not happen. Despite Mayor Fife stating that he was "looking forward " to it, Mayor Fife did not allow Harrison Fest to proceed because then Councilman Anselmo Millan announced that he was running for Mayor in 2018 in the Democratic Primary.

For more information on Harrison Fest, you can visit their website.

For more information on Anselmo Millan candidacy for Mayor, you can visit his website.

Let Us Know Your Thoughts on Harrison Fest on our Community Discussion Board.  If you have not signed up yet to participate you can Sign Up now.