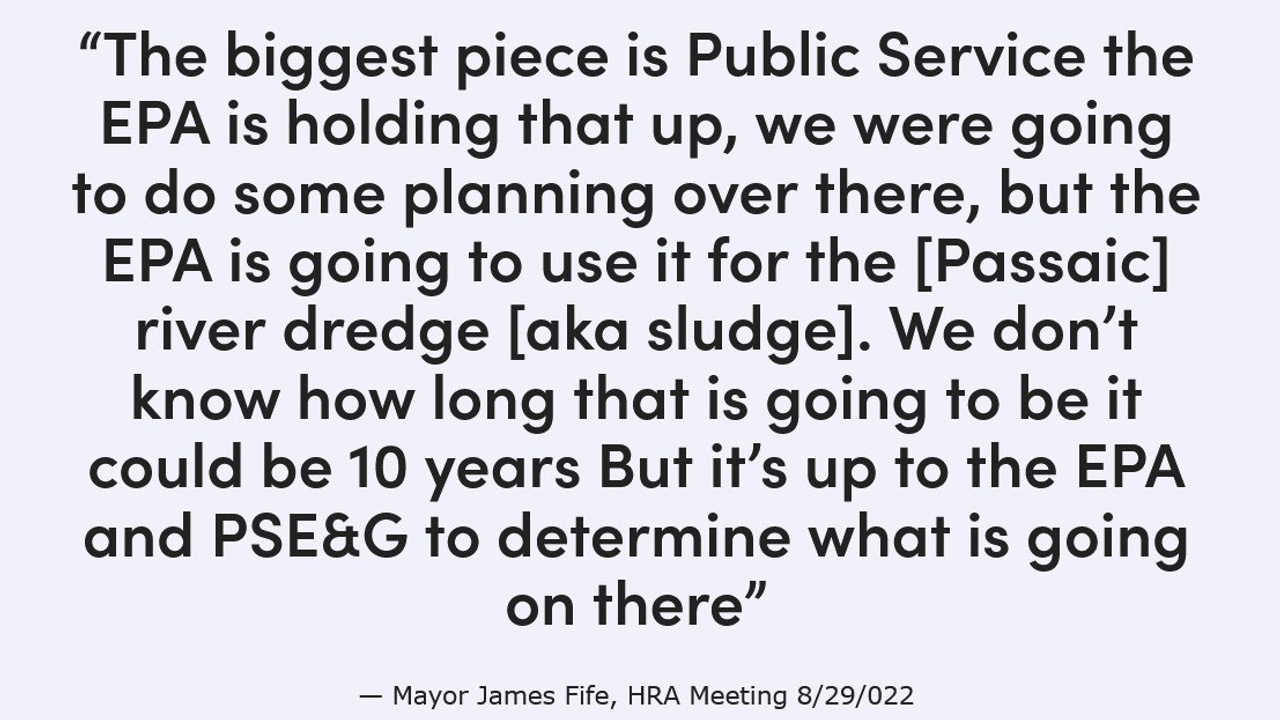 At the August 29, 2022, Redevelopment Meeting, Mayor Fife stated when referring to the former PSE&G Gas Works, “Of course, you have the biggest piece Public Service,  the EPA is holding that up.  We were going to do some planning over there but the EPA is going to using it for the [Passaic] river dredge [aka sludge].  We don’t know how long that is going to be it could be 10 years.  But It is up to EPA and PSE&G  to decide what is going on there.”

The last statement is that “it is up to EPA and PSE&G to decide” what the next use of the PSE&G property is.  But is that statement true?

At the same Redevelopment meeting where he made the above statement, Mayor Fife had rejected the idea of “buying back” from a developer the property in front of the Red Bulls stadium which is closest to South Frank E. Rodgers Blvd. so that it could become a Park that is one or two blocks in the center of the redevelopment zone.  The park would also help with the absorption of rainwater in an area that is known for flooding.

Mayor Fife seemed to be unaware of the powers that he had as Chairman of the Redevelopment Zone to eminent domain properties  Or he simply was not interested in rocking the boat or offending the EPA. Mayor Fife stated at the Harrison Mayor & Council meeting on September 20, 2022, that he did not know what the EPA was going to use the PSE&G property for but his statement that “the EPA is going to using it for the [Passaic] river dredge [aka sludge].  We don’t know how long that is going to be it could be 10 years.” Demonstrates that Mayor Fife knew of plans to dewater Agent Orange dredge at the PSE&G property and he never alerted the residents of Harrison.

Agent Orange is extremely toxic and causes seven different cancers.  It also causes heart disease and diabetes according to health authorities.  Across the river, a business owner is fighting the taking of his trucking company property next to the Passaic Valley Sewerage Authority (PVSC) and pointing out the obvious.  The PVSC property is in a Flood Zone and a Sandy-type storm could flood the dewatering plant and spread Agent Orange byproducts (dioxins) into residential neighborhoods in Newrk.  The PSE&G is similarly in a Flood Zone with the same issue that the PVSC property has..

Why would Mayor Fife not object?  Many have speculated why but we have no proof of impropriety at the moment. Mayor Fife canceled two recent meetings that he Chaired, the Mayor & Council meeting of October 18, 2022, and the Harrison Redevelopment Agency which was supposed to hold its next meeting this Monday, October 24, 2022, via Zoom.  There won’t be another public meeting where Mayor Fife would be subject to having to respond to questions and/or where the public could make public statements to him before the Tuesday, November 8th Mayoral Election.  Is it a coincidence that the meetings were canceled?  Maybe. But if the Mayor wanted to state his current position about the EPA’s plan to use the PSE&G property for dewatering toxic Agent Orange dredge (as the Mayor put it) then wouldn’t a Mayor & Council meeting and/or a Harrison Redevelopment Meeting be the perfect backdrop for a statement in opposition to the EPA dumping plan.

The Mayor’s supporters have stated on social media in particular Facebook, that Mayoral Candidate and long-time Councilman Anselmo Millan lied about Mayor Fife making the statement that the EPA was going to dump dredge from the Passaic River in Harrison as part of Millan’s effort to gather 1000 signatures to take to Governor Phil Murphy and the EPA Administrator Michael S. Regan, to Stop Dumping of Sludge for Dewatering in  Harrison.

The Mayor’s statement was video recorded and released after the statements were published on Facebook by James Doran who holds at least three jobs including being a Councilman in Harrison, and the Director of Personnel in the Town of Harrison Board of Education, PVSC Commissioner, were made.  Mayor Fife made the statement and a subsequent release of video from September 20, 2022, Harrison Mayor & Council meeting did not result in Mayor Fife issuing a public statement that he did not state the words that clearly were his voice captured on the audio track of Zoom.

Mayoral Candidate and 26-year Councilmember Anselmo Millan stated publically on Facebook Live that if he is elected the next Mayor of Harison, he will immediately tell the EPA that the PSE&G property has been decontaminated and that the Town of Harrison residents intends to use it for its planned purpose to be a Green Space (Park) and a multi-level Community Center.  Millan also stated that he was not a Liar and will continue to gather signatures going door to door and online.  More information is available on the Petition and the grassroots effort to stop the EPA from dewatering Agent Orange sludge in a residential neighborhood on the ForABetterHarrison.com website.

It is clear that Mayor Fife has the power as chairman of the Harrison Redevelopment Agency to eminent domain the PSE&G property and/or purchase it from PSE&G at fair market value and build the Green Space Park and a community center.  Parks are up there with roads for eminent domain approval of taking someone's business. Prior businesses in the Redevelopment Zone were taken to build what is now built in Harrison.

What do you think?  Why would a sitting Mayor not reject immediately a suggestion that a property designated in a redevelopment plan as a Green Area and Community Center would not be used for that purpose now that the property has been decontaminated?

Let Us Know Your Thoughts on our Community Discussion Board.  If you have not signed up yet to participate you can Sign Up now.